A slow start to the week did little to hold back the positive forces for raw sugar futures. The soon-to-expire May19 contract tested the upper limits of the recent range, at 12.80 USc/lb. Despite the large producer selling hanging over the market, sugar prices have continued to attempt to press forward. Support from a surging ethanol parity and a large speculative short position has offered little assistance of late. Heavy producer pricing, softening white premiums and a weak macro environment continue to win the tug of war, and crude oil prices and the BRL faced consecutive days of losses. Fundamentally, both supply and demand variables will keep sugar in its current range. Weather in Brazil (a potentially stronger El Ninõ event) and India (a poor monsoon season) remains a game changer, with a likely advance into the 12–13 USc/lb range. 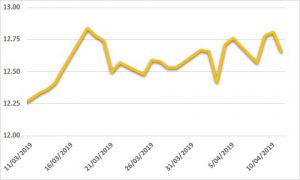 The AUD traded comfortably above USD 0.71 this week. Supported by positive economic data, elevated natural gas, iron ore and coal prices, the AUD looks set to break out of its recent USD 0.70–0.72 range. Though interest rate differentials continue to provide push back, rate cut expectations need bad news to feed them. RBA Deputy Chair Guy Debelle spoke earlier in the week about the ‘state of the economy’, with his speech heightening the calls for a rate cut in the medium term. As key headlines showed, “there is tension between strength in jobs and weakness in output. How this tension resolves itself in the coming months will be important for future path of rates”. The labour market remains strong and indicators of employment remain solid. The RBA will be paying attention to housing, noting mortgage arrears remain low. The economic data calendar will be important over the coming months, as the market looks for signs to signal a rate cut. 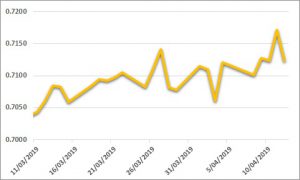