A shortened trading week—owing to the Martin Luther King holiday—did little to suppress price action last week. Friday night fireworks were set off as the soon-to-expire prompt March19 settled 50+ points lower on the day. With little fresh news in the fundamental space, Friday’s move appears to have been led in large by a liquidation of speculative longs. In India, millers remain positive that the Government will come to their aid  in the form of higher domestic prices. The harvest continues to progress better than expected, with production 8 per cent higher on a year-on-year basis. The US Federal shutdown has ended, albeit temporarily, but we are told we should expect the next Commitment of Traders report within two weeks. In the week ahead, we will continue to monitor the situation between Indian mills and the Government. 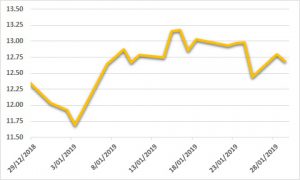 Much like sugar, the AUD had a weak end to the week, finishing back below USD 0.71. Headlines have continued to be highlighted by trade discussions, concerns over global growth and geopolitical risks. The AUD was a quick loser in that, as the USD surged higher into the back end of the week. Despite a better-than-expected local jobs report, the AUD remained under pressure as global macro risks persist. A busy week on the economic data calendar, with local CPI and PPI due out before we see the FOMC rate decision (Thursday morning) and a raft of US data due out on Friday. 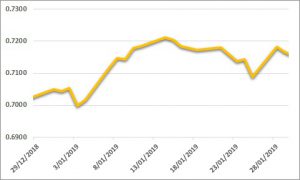