Raw sugar futures have had a mixed week, with the prompt May19 contract hovering around 12.50 USc/lb heading into the last session of the week. Price action was highlighted by a small technical bounce toward 12.75 USc/lb before overhanging producer pricing put the brakes on a further advance. Monday night’s frenetic option activity, followed by the total opposite the next day, remains a talking point, with no one entirely sure who traded that size option. Fundamentally, Thai estimates continue to come in around 14 mmt. We will have to wait a little longer to see whether the full extent of larger Indian and Thai crops will have influence over the Brazilian sugar mix. With the Brazilian harvest due to kick off soon, ethanol is likely to be favoured early in the season. 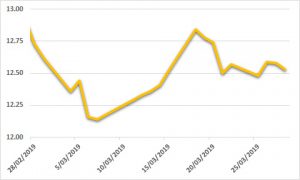 A challenge of recent technical resistance levels for the AUD was exacerbated by commentary from a more dovish RBNZ on Wednesday morning. Despite some easing near USD 0.7150, the AUD was slapped back below USD 0.71. The RBNZ joined the choir of central banks around the globe preaching an easing bias toward rates. With little data of note released this week, and trade discussions dragging on, the AUD has had a run up to USD 0.71 and looks like heading into the end of the week. Whilst there is some belief a trade deal may fall over, US White House officials were quick to hit back, stating whilst the deal may be dragging on, there is steady progress. 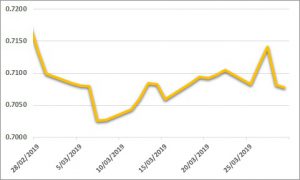