Raw sugar futures struggled to hold in the face of persistent downward pressures around anticipated output in major producing regions, alongside a heavy macro environment. Price action was largely positive until Friday, when the soon-to-expire Jul18 contract slipped below 12 USc/lb before settling at 12.02 USc/lb. A considerably weaker Brazilian real afforded producers an opportunity to do some pricing. The latest UNICA report for 2H May was released this week—surprisingly, ATR yields beat expectations, bolstered by drier weather. The commodity complex struggled to make headway into the back of the week, as the US hit China with trade tariffs, with commodities hit hardest. Looking ahead, there is mention of a potential El Nino weather event, although Thai and Indian crops are unlikely to be disrupted, given timing, and Brazil should expect a wetter finish than normal. 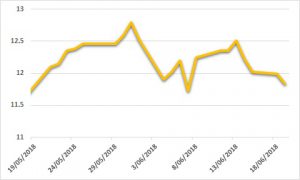 Despite a disruptive weekend following the G7 summit in Quebec, currencies started the week relatively quietly. The historic Trump/Kim summit was declared a success when the US and North Korean leaders met in Singapore on Tuesday, with a high-level ‘deal’ for complete denuclearisation of the Korean peninsula signed by both leaders. AUD price action was again fairly muted following the meeting, as all eyes turned to the FOMC June meeting. As expected, the Fed lifted rates another 25 bps, signalling that another two hikes in 2018 are likely. The AUD moved lower in response to the central bank’s statement and has continued to slide since. The RBA remains some way off raising rates as yet—low wage growth and inflation expectations are making it difficult to hike rates in the near term. A quiet week ahead on the economic data calendar, as our attention returns to the tit-for-tat trade issues between the US and China. 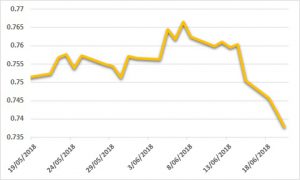