An eventful week for sugar as the market saw new life-of-contract lows across the board. The fundamental outlook remains unchanged, with India yet to agree to an export program – which may deteriorate the effect of exports, given the potential amounts to be sold at an already-low price. UNICA released its latest report, maintaining low sugar mix levels but noting they are beginning to creep up. The latest Commitment of Traders report showed non-index funds reduced slightly against their net short positions. Despite falling flat prices, front spreads narrowed, highlighting the delay to the coming surplus. Looking ahead, Indian export programs and potential subsidy announcements will hold our attention as key drivers. 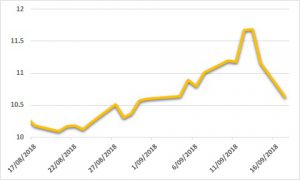 The AUD maintained a USD 0.7750 handle over the week, despite a look above USD 0.78 on Friday. Easing trade tensions between the US and China supported the AUD. Data and speakers gave mixed messages this week, as consumer confidence released below expectations but RBA Governor Lowe maintained status quo. The FOMC meeting minutes were released without any issues. Commentary was largely aligned to dot plot forecasts and support comments following the announcement. Locally, the Financial Stability Review on Friday showed no concerns around the increased cost of funding. In the week ahead, the economic calendar is highlighted by the RBA meeting minutes and local employment data. Whilst very quiet, we expect the market to continue to take its lead from largely macro themes dealing with trade and conflicts involving the US. 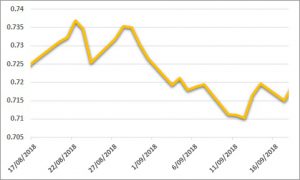