As widely reported, the New York sugar week was dominated by discussions around dry weather in Brazil and global trade surpluses over the coming seasons. Raw sugar prices reacted by erasing gains made in the week before. The latest Commitment of Traders report showed a reduction in net short spec positioning to 150,500 lots from 161,500 lots in the prior week. UNICA released April 2H crushing and production figures, citing higher cane throughput, better yields and the sugar mix remaining in favour of ethanol. Looking ahead, rainfall is expected in Brazil this week, whilst India and Thailand are tipped to receive scattered rains throughout. 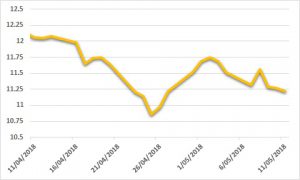 A tough week for the AUD, which made fresh 11-month lows at USD 0.7413 before closing the week back above USD 0.75. Weaker-than-expected local retail sales and speculation about whether the US would withdraw from the Iran nuclear accord kept the AUD under the pump. Soft US inflation data saw the USD give up some of the recent gains before the AUD eventually finished the week at USD 0.7540. In the week ahead, the local calendar is busy – RBA Deputy Governor Debelle is speaking in Sydney and the RBA May meeting minutes are due out, followed by employment data on Thursday. US and China retail sales figures are due on Tuesday, with both expected to be slightly weaker than previous. 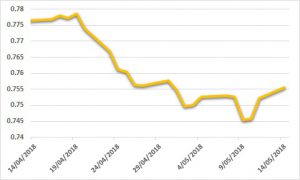