Despite a relief rally erasing the previous day’s losses, raw sugar futures were subdued last week. Spread action was lively as the prompt March19/May19 spread moved 10 points higher on the week. In India, the harvesting continues to push along well, however, exports have stalled whilst mills await further direction on Government subsidies. Much like in India, the Thai harvest is progressing well, thanks to better yields and operational mills. The soon-to-expire March19 contract has lifted over the past fortnight, alongside hydrous ethanol parity. Heavy commercial selling looks to cap the market, while Brazilian weather and crop reduction concerns in Thailand and India continue to support it. With the annual Dubai Sugar Conference now complete, in the coming days we will start to see reports of themes or points of interest to watch.

The AUD was on the back foot last week, despite a change in rhetoric from the RBA. A reduced rate forecast and a more neutral tone towards policy lessened the blow of some weak local retail sales earlier in the day. Further weakness was experienced by the AUD on Thursday, as trade tensions weighed on commodity currencies and equities. The Quarterly Statement on Monetary Policy released by the RBA on Friday was as expected, following Governor Lowe’s statement on Tuesday. Growth and inflation forecasts were downgraded in the commentary. The AUD continues to gyrate above and below USD 0.71 this week. A handful of US and Chinese economic data is due tonight and tomorrow to round out the week. 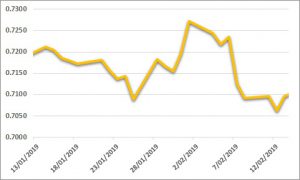