It was a turbulent week for raw sugar futures ahead of the annual New York sugar week, with heavy fund selling leading the market into the abyss. The prompt July19 contract slid below key support at 12 USc/lb. Funds appeared to take a breath as the latest UNICA report showed a strong preference for ethanol over sugar in the second half of April19. Whilst largely expected, it appeared to be the handbrake the market was searching for. Friday also saw the weekly Commitment of Traders report, highlighting specs with a net short 125,000 lots. Given the Tuesday-to-Tuesday reporting period, much expectation suggests specs sit closer to 140,000 lots. Following last week’s negative price action, the market appears to have stabilised at technical support levels near 11.70 USc/lb. As a bounce back above 12 USc/lb looms, large Thai producer pricing likely sits above 12.50 USc/lb, capping too much optimism. Across the broader spectrum, the US and China trade war pushes on. The US imposed further tariffs, despite productive discussions held over the weekend. China retaliated, implementing 25 per cent tariffs on a further USD 60 billion worth of US goods. We remain of the opinion that a trade deal to suit both parties will need to extend further. 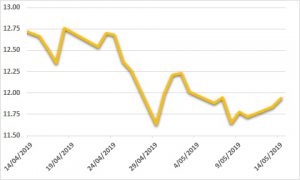 The AUD capped off a big week below USD 0.70. The local unit remained under pressure, with strong US data and no policy change from the RBA. The RBA left interest rates on hold as the market, which was split by the toss of a coin, looked for indications of drivers that will force the bank to cut. Those supporting a cut were supported by weak local inflation in the previous week. However, the RBA cited stronger employment as the caveat for no change. With US and China trade delegates meeting on Friday, much of the market’s attention was on further developments in negotiations. As expected, the US increased tariffs as discussions progressed on Friday. US President Trump took to Twitter over the weekend, encouraging China not to retaliate to tariff increases. China returned serve less than 90 minutes later, with 25 per cent tariffs on a further USD 60 billion worth of US goods. Looking ahead, markets will remain cautious as the trade war continues to swing prices around, based on rhetoric. Thursday sees the local employment report for April, which will be key for the RBA’s meeting next month. 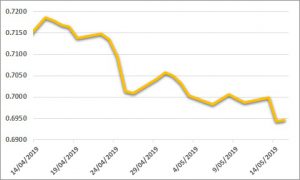