An uneventful week for raw sugar futures, which traded a 76-point range to finish the week slightly higher. With most now back from the latest Dubai Annual Sugar Conference, some of the main takeaways are summarised as follows. Attendees were overwhelmingly bearish due to statistical surpluses on the way. Trade houses expressed views on the upcoming March18 expiry, suggesting a potential shortage of raws prior to the Brazil crush. There is a strong belief that weather risks and the ethanol switch in Brazil will determine where prices go. The EU will supply 4mmt export whites and is likely to export strongly for at least three years under a new sugar regime. Brazil holds the origin surplus as it needs ethanol incentives to balance the market.

Following increased volatility in global asset markets, the AUD has underperformed in the last week. The USD made up for recent weakness over the week as yields soared, with the AUD bottoming out at USD 0.7759 for the week. Locally, we saw the first RBA meeting of 2018, which was accompanied by commentary perceived as ‘more upbeat’ as the RBA left rates on hold. RBA Governor Phillip Lowe spoke at the A50 Economic Forum later in the week, where he highlighted that the board were not in a rush to raise rates. This week, the US CPI and local unemployment data will be released. 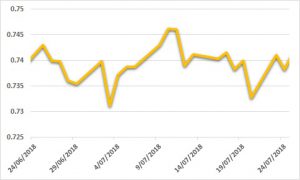